Generally, Apple devices such as the iPhone and iPad drive more mobile searches than Android phones in the United States. Surprisingly, outside of the U.S., this isn’t the case! 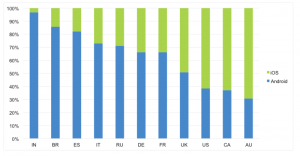 As you can see above, this graph from Search Engine Land shows that iOS has an edge over Android in many foreign countries, with the exception of Australia and Canada. This represents the popularity of certain platforms in different countries.

When you design your responsive website, it’s, of course, critical to design for both Android and iOS.  Don’t neglect one platform just because it has a slight edge over another – your website should perform equally well regardless of the user’s operating system!

4 Reasons Why WordPress is the Best CMS for SEO